KNOW THY ENEMY, BUT DON'T PARTY WITH THEM

The types that are attracted to No Kill never cease to amaze me. We have, of course, the likes of Best Fiends, or Best Friends, as idiots call them. A cult who figured out they got more money from pimping animals than from passing around the church plate.

Now here is Jane Berkey, idol and hero to every pit lover in the country. If you don't know her, here is but some info on this woman.

Seems there are other loves of Ms. Berkey. Warning: May be more than you want to know.

Credibility. Know thy enemy better than you know thyself. Attack credibility. How many officials want to be linked with the likes of these folks? More tools for the arsenal.
Posted by HonestyHelps at 4:07 PM 8 comments:

HOW IRRESPONSIBLE IS THE HUFFINGTON POST?? GALILEO DOG ANSWERS.

This month is a recognition month for the misunderstood pit bull breed. Last year the Huffington Post was honoring the Pit Bull Awareness Day with an article showing the wonders of the "nanny" dog and their tiny playmates, kids.

Included in that stream of photo ops was one picture of a small boy hugging his pit bull, photo #61 of 73 photos, the same pit bull that killed him a month or so later. The Huffington Post ran this picture along with the others until it was brought to their attention. They just took it off, no apologies, nothing to the family, no explanation. 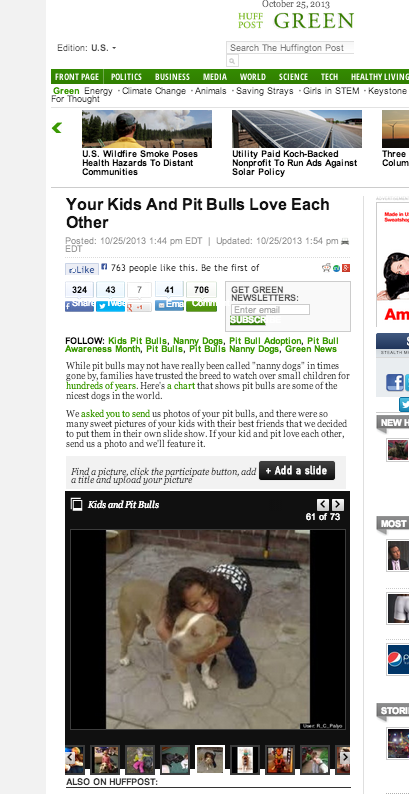 Recently the Huffington Post has given voice to the pit community via Douglas Anthony Cooper.
Cooper, a small time novelist from Canada, has condemned one of the two only sources that track disfiguring and fatal dog attacks, Merritt Clifton.

He also attacked another Canadian, Barbara Kay, who speaks so eloquently and knowledgeable about the issue of dangerous dogs.

It is irresponsible journalism to continue on the path that the Huffington Post is on, which is pimping, yes pimping, pits. Attacks are daily, as of this writing, pit types have killed 25 people in 2014 and countless other animals.
Last Sunday, families were blocked from attending a memorial to the ones killed by dangerous dogs, not just pit bulls, three breeds were represented. Pit bull owners and their pit bulls blocked families from this tribute.

Recently they presented pits in tutus, a series. When pits are mauling and killing like no other breed in history, is it responsible journalism to support the killers?

"MAD WORLD" by Galileo Dog has answers. "All truths are easy to understand once they are discovered; the point is to discover them."
Posted by HonestyHelps at 10:16 AM No comments: