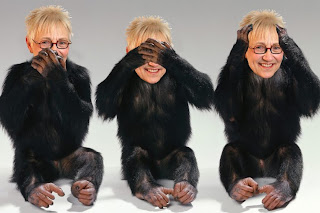 "See no evil, hear no evil, speak no evil" is commonly used to describe someone willfully turning a blind eye to the immorality of an act in which they are involved.

My readers know that I have a problem with the importing of dogs when the local shelters are still euthanizing. Brenda Barnette, while in Seattle, was doing this importation, illegally I might add, and at the same time was working with Claire Davis and Kim Sgro to "create" instability in the King County shelters for Barnette's advantage. Note that Claire Davis used the term "create" in a letter to Dow Constantine when he turned against this mutant clan. http://workingtohelpanimalstodaytomorrow.blogspot.com/2010/06/terrorist-or-idiots-you-decide.html Can't chalk it off to a slip of the tongue since Davis is an attorney and well aware of the English language usage. I feel this importation scheme is not to save pets in as much as it is being used to keep the "rescues" in business while it puts the pressure on shelters to go "No Kill". Taking homes from shelter animals is immoral and these "rescues" doing the importation are more guilty of shelter pets dying than the shelter ever could be.

In conjunction with this stance, there is an excellent article in Opposing Views about a recent exportation of LA City dogs to Canada. http://www.opposingviews.com/i/l-a-shelter-dogs-transported-to-canada-rescue-or-ruse This article points out some of the problems with these exportations, like a lack of proper followup. One YouTube video shows what has happened on another exportation by those foolish LA rescue groups who believe that they are saving pets.
http://www.youtube.com/watch?v=MFf0_fFkU5s
http://www.youtube.com/watch?v=QDb2pGIquDY&feature=related

Also of note is Barnette's feeble attempt to offset her lack of responsibility in this matter. She has given orders to these "rescues" that they must qualify the receiving rescue and the only qualification is that they be "No Kill". YET BARNETTE IS AWARE OF HER FRIEND, KIM SGRO, WHO SENT KATRINA DOGS TO A "NO KILL". ALTHOUGH SGRO WAS TOLD THIS "NO KILL" WAS NOTHING MORE THAN A HOARDER, SHE THREATENED PEOPLE WITH A LAWSUIT RATHER THAN CHECKING IT OUT. THEY FOUND THE KATRINA DOGS STILL IN THE SAME CRATES, SOME DEAD, MONTHS LATER. http://www.komonews.com/news/archive/4167541.html
http://www.inhumane.org/data/T&WHanson.htm Do you have any idea how much the term "no kill" is used by non profits and they turn out to be abusers and hoarders? It is almost commonplace now to hear about these "No Kill" abusers. Just like using the term "Humane Society", "No Kill" is now a generic term that anyone can use, doesn't make it so however.
This isn't about saving lives, this is about making money, brokering dogs and trying to cram "No Kill" down our throats. One pitiful blog in LA has a video of this last transport, only thing is that the video is not of this last transport, maybe another one, but not the last one. The last transport was done with an individual and not a very nice one either. I ask you if this one person was able to take all these dogs on walks or if he allowed them to sit in their poop and urine for about a day. This blogger is a real nut case who supported Boks, then didn't support Boks, hated the ADL-LA, and now is in bed with the ADL-LA, just can't make up his mind. I doubt he has one really. Now he is kissing up to Barnette just like he kissed up to Boks, refusing to see the evidence in front of his nose.
Use your heads people. These "rescues" expect us to believe that there are places that have no problems with a pet overpopulation. Course isn't that the philosophy of "No Kill" no pet overpopulation? None of these "rescues" have investigated whether the local shelters where these imported dogs are going are still euthanizing. As long as those local shelters are euthanizing for time and space, it is morally wrong to send more dogs into the area. They aren't saving lives, they are taking lives. And most of them are non profits. Do their donors understand what they are doing, much less agree with it. We donate locally because we want to see the benefits locally. It's a scam, plain and simple, a devious plot to force more killing of shelter animals so these cultists can push Nathan Winograd's program. There's many more effective ways to save shelter animals, but this ain't one of them.
Posted by HonestyHelps at 3:57 PM

I see the southern California sun agrees with Barnette. She is looking tan and healthy.

Remember Don Chambers, the one that Best Friends shipped those pit bulls to? He called himself a No Kill pit bull rescue. Then he tortured and killed the pit bulls.

Or EDNAH, the one that Barnette's friend Kim Sgro shipped pit bulls to from Pasado's no kill? EDNAH was a No Kill hoarder torture chamber run by Tammy Hanson, repeat offender No Kill hoarder and torturer.

Here is a picture of what Barnette wants to do to LA shelter animals, and wants these fake "rescues" to do.

So Brenda Barnette is saying it is ok to send dogs to dog fighters, hoarders, animal lab dealers, whatever.

This is not surprising since these breeders hate shelter and rescue animal and don't care if they are tortured and die. Breeders would actually prefer it. Then they don't get held responsible for the overpopulation they contribute to.

Barnette wants to lie to people and say these pets found homes while a Don Chambers or Tammy Hanson type has tortured and killed them.

No REAL rescue group that cares about these animals ships them off like this. Animal dealers and animal torturers do. Scam artists do. People who really love animals and care about them don't.

These are NOT real rescue groups that are shipping off these animals like this.

Looks like Barnette is spending more time tanning than working.

Thank you Anon, I hadn't thought of EDNAH and the relationship with Barnette. Plus Chambers is another good one because Barnette came from Best Fiends. Good catch!!

It was Kim Sgro, Barnette's direct associate in King county threatening the animal control officers and trying to seize control and involved with Winograd, that SPECIFICALLY AND PERSONALLY was responsible for sending those pit bulls to their death at EDNAH.

She stated such in a news report!

"YET BARNETTE IS AWARE OF HER FRIEND, KIM SGRO, WHO SENT KATRINA DOGS TO A "NO KILL". ALTHOUGH SGRO WAS TOLD THIS "NO KILL" WAS NOTHING MORE THAN A HOARDER, SHE THREATENED PEOPLE WITH A LAWSUIT RATHER THAN CHECKING IT OUT'

I just added another link on the post showing pictures of this inhumanity. http://www.inhumane.org/data/T&WHanson.htm

Was very happy to see BB go. She opposed every reasonable piece of spay/neuter funding legislation put forth in the state legislature. I guess it somehow threatened her massive breeding operation.

But more important - King County had to investigate reports from staff that she threw a two week old puppy into a wall when it wouldn't bottle feed. Nice.....

So many great orgs out there doing good - no reason to give money to the Seattle/KC Humane Society.

Anon:36 can I get the info on the puppy? Would that be public record? I bet you guys were happy to see her go, we are working on our happiness trying to "get rid of" her.